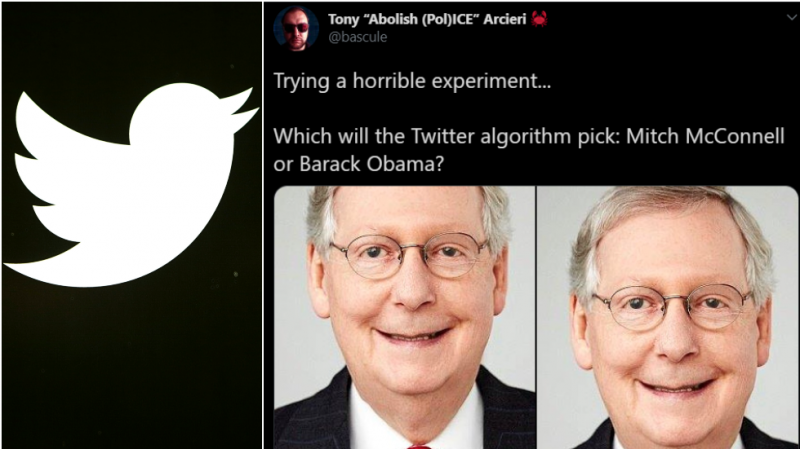 The social media crusade began after a Twitter user observed that the site consistently left out Barack Obama’s face when cropping an image containing portraits of the former president and Senate Majority Leader Mitch McConnell.

In several ‘experiments’, the politicians’ ties were changed and more portraits of Obama were added to the image, with each case resulting in the former president’s face being cropped out when posted to Twitter. This can mean only one thing, according to socially-conscious internet sleuths: Twitter’s photo-cropping algorithm is a big fat racist.

The explosive thread-based investigation garnered 39,000 retweets and more than 115,000 likes.

One commenter said that Twitter’s face detection algorithm “systemically considers white faces to be ‘more’ of a face than black faces,” and that the problem could be alleviated if “people working on implementing this project were less homogenous.”

An identical experiment using stock photos of a black man and a white man appeared to deliver similarly ‘racist’ results. One reply lamented that “people [would] rather see the white person” and that Twitter couldn’t be blamed; the algorithm was simply optimizing to cater to the subconscious racial preferences of the users.

Twitter’s Chief Design Officer Dantley Davis took issue with this interpretation, however, insisting that his company really was guilty of a racially insensitive faux pas.

Twitter isn’t the only company accused of automated racism, even if unintentional. Zoom, the popular video conferencing program, was recently accused of having a buggy face-recognition algorithm that sometimes erases black faces during video chats.

Over the past several months, countless companies have been accused of politically incorrect impieties, even after expressing solidarity with Black Lives Matter and other social justice movements. Ironically, Twitter has been an open supporter of these righteous e-crusaders. Its CEO, Jack Dorsey, recently donated a “no strings attached” $10 million to Ibram Kendi’s Center for Antiracist Research. Kendi is a bestselling author who’s become famous by telling white people that they’re racists.