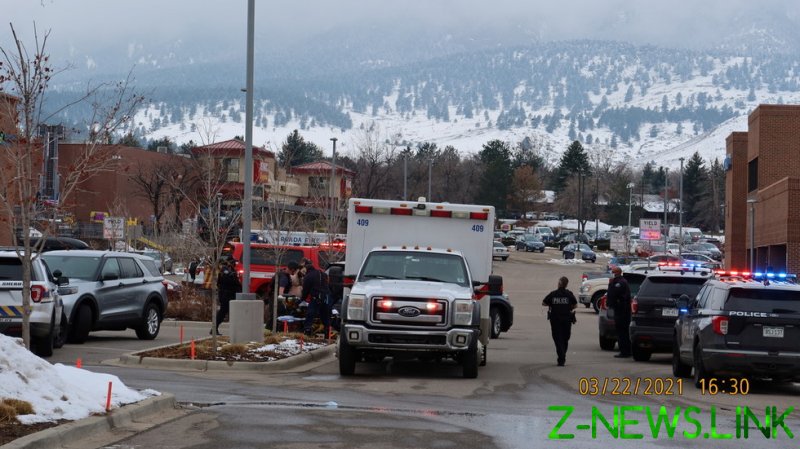 “Our hearts go out to all families impacted. There are 10 fatalities,” Boulder Police Chief Maris Herold told a press conference on Monday evening, several hours after a gunman went on a shooting rampage at a King Soopers supermarket in the Table Mesa neighborhood.

Among the victims was officer Eric Talley, who was first to respond to the reports of a gunman with “a patrol rifle” at the store, Herold said, calling the officer’s conduct “heroic.”

Boulder County District Attorney Michael Dougherty also praised the officer. “My heart goes out to Eric Talley’s family,” he said, while extending condolences to the families of those killed.

The names of other victims have not been released as police still have to notify their next of kin.

One suspect has been taken into custody and is undergoing treatment for an injury. While police declined to identify the suspect, a live feed from a local news outlet earlier showed one man being led away from the scene of the shooting in handcuffs. He was partially naked and visibly bloodied. Police said that the only person who suffered injuries in the incident was the suspect.

No motive for the shooting has been established yet, with police saying the investigation is in its early stages.

Along with police, federal, state and local agencies are taking part in the probe.

An earlier report of an “armed, dangerous individual” at a location near the grocery store, which prompted a shelter-in-place notice, tuned out to be unrelated to the store shooting, police said.