10 killed, 44 injured as bus swerves off highway and crashes in Croatia (PHOTOS) 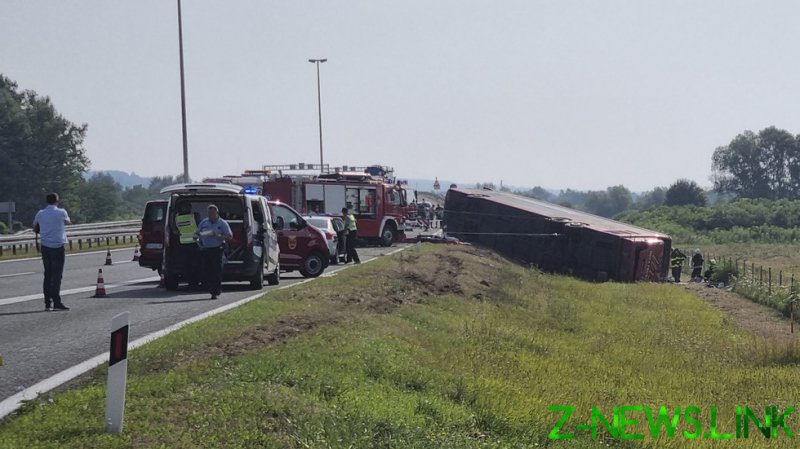 The incident took place early on Sunday morning. The bus was traveling along a highway linking the Croatian capital of Zagreb to the Serbian border when it suddenly swerved off the road and overturned. Photos published on social media show the bus lying on its side on a roadside.

Police said the bus had Kosovo license plates and was traveling a regular route from Frankfurt, Germany, to Kosovo’s capital of Pristina, south of Serbia.

The accident was reportedly caused by one driver briefly falling asleep and losing control over the vehicle. He survived the crash and was arrested. A local police chief, Franjo Galic, called the crash “one of the worst accidents I have ever seen.” At least 10 people, including the other driver, died in the crash.

According to the officials, 67 people were on the bus, including two drivers. They were mostly Kosovan workers and their family members returning home from Germany for the summer holidays, some media reports suggested.

The incident also left 44 people, including at least one child, injured. Eight people were in a serious condition, according to Josip Samardzic, the head of a hospital in a nearby town of Slavonski Brod. The identities and ages of the people that were killed and injured in the crash have not yet been made public.

Croatian authorities expressed their condolences to the relatives of the victims and wished a speedy recovery to those injured. Kosovo sent its interior minister to Croatia over the incident.

Traffic on the highway was halted for hours until the bus was removed. The road where the crash happened is usually very busy in summer since it is a popular route used by tourists and foreign workers returning from Western Europe to the Balkan countries.