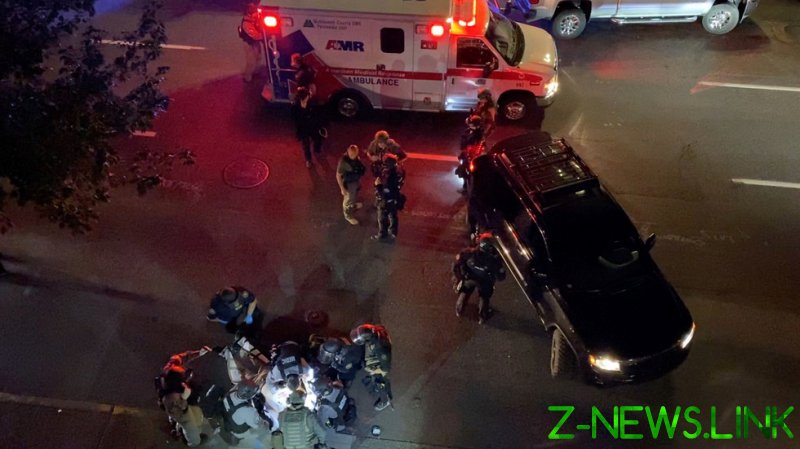 “Portland Police officers heard sounds of gunfire from the area of Southeast 3rd Avenue and Southwest Alder Street. They responded and located a victim with a gunshot wound to the chest. Medical responded and determined that the victim was deceased,” police said in a statement.

The victim, a white male, was shot as it came to the showdown between Trump supporters that drove into the city on Saturday evening as part of pro-Trump ‘caravan’ and Black Lives Matter protesters, intent on impeding their passage.

It was not immediately clear whether the deadly shooting was connected to the political confrontation in downtown Portland. Some reports said the victim was wearing a hat of the ‘Patriot Prayers’ group, indicating that he was a Trump supporter. Police earlier advised residents to avoid areas where scuffles have been taking place throughout the day.

The caravan of some 600 vehicles arrived in Portland on Saturday, marking the third consecutive weekend of pro-Trump demonstrations in the city. Before that, Portland had for months remained the vanguard of BLM activists, who repeatedly clashed with federal officers who were protecting a federal courthouse. Federal forces have been accused of abusing their power in cracking down on the protesters.

Donald Trump blamed the city government for allowing the protests in Portland to run out of control and fester as he runs for re-election on a law and order platform. His opponents say he is targeting BLM crowds to pander to white supremacists. They also tend to downplay the damage done by rioting and looting that sporadically happened amid the nationwide movement, saying beating systemic racism in the US was more important than maintaining public order.