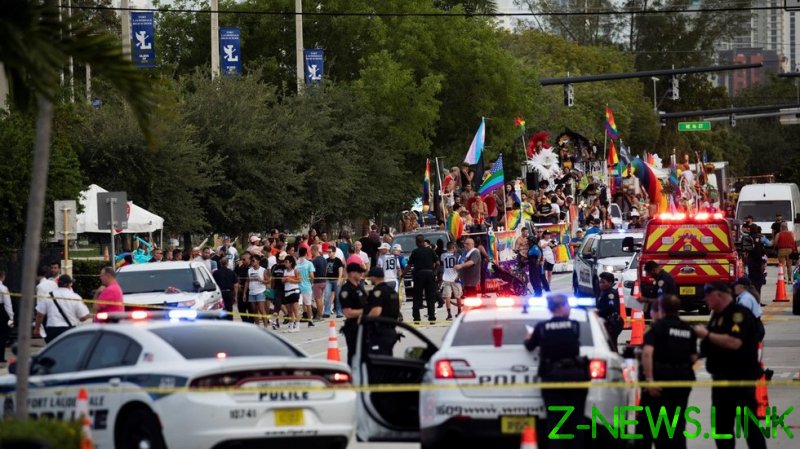 The incident occurred just as the Wilton Manors Stonewall Pride Parade kicked off on Saturday evening. A white pickup truck sped up, reportedly in the direction of the car of Democratic U.S. Rep. Debbie Wasserman Schultz, but instead crashed into a business and hit two people, one of whom did not survive their injuries.

Fort Lauderdale Mayor Dean Trantalis, who was present at the parade, told the local media that the suspected assailant’s car missed the lawmaker’s vehicle “by inches” before it “smashed through a gate, smashed into a landscaping company and hit two people.”

A video shared on social media shows police officers rounding up a man wearing a white T-shirt and black glasses at the scene.

While police said that two people were “struck by  a vehicle” while marching to celebrate “inclusion and equality,” they stopped short of saying if the incident was a premeditated attack.

However, the mayor appeared to have little doubt that the collision was intentional.

“This was a terrorist attack against the LGBT communities. This is exactly what it is,” Trantalis said.  “It was deliberate, it was premeditated and it was targeted against this specific person. Luckily they missed that person, but, unfortunately, they hit two other people,” he added.

Wasserman Schultz, who was attending the event in a convertible, was looking visibly distressed in wake of the incident.

The parade was cancelled to allow a “thorough investigation” and out of respect to the victims, the city announced. However, the Stonewall festival is set to continue, police confirmed, declaring that there was “no danger to the public.”