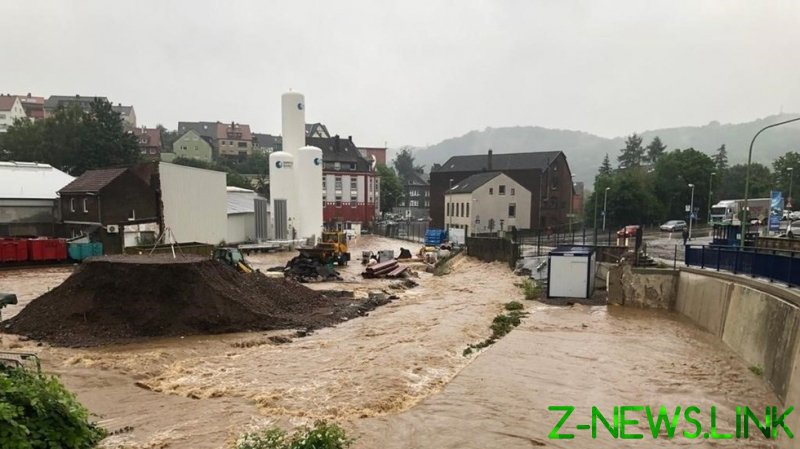 Storms and heavy rainfall between Tuesday and Wednesday prompted the German Weather Service to issue severe weather warnings for the states of Saxony, Thuringia, North Rhine-Westphalia (NRW) and Bavaria.

A fireman was killed while performing rescue work in Altena, North Rhine-Westphalia, with police on Wednesday calling his death a “tragic accident”. Two men were reported missing elsewhere in the region.

In the nearby city of Hagen, 100 liters of water per square meter fell overnight, according to the weather service, causing the Volme river to burst its banks and prompting officials to declare a state of emergency. Footage from Hagen shows the extent of the flooding, with one Twitter user posting video of what appears to be a roaring river, but is in fact the remnants of his driveway.

City officials urged anyone living near the river banks to leave their homes immediately for higher ground, and warned people to keep well away from the debris-laden floodwaters.

Dusseldorf was also plagued with floodwaters, with the fire brigade responding to over 350 calls for assistance before midday. Power was cut to some parts of the city by the emergency services as a precaution, officials told local reporters, and residents in the Grafenberg district were advised to leave home due to the flooding.

The national weather service has warned that further heavy rainfalls are expected over western Germany into Thursday morning.